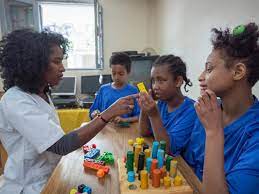 Autism among Nigerian Children. What is autism? Does autism exist in Nigeria? What causes autism? How does the person with autism behave?

Developmental periods are age targets where certain behaviors or capabilities are possible. So developmental age periods are targets periods in childhood, which could be from birth to eighteen years. And these developmental stages target the physical, learning or cognitive, language and behavior.

The challenges or deficits in autism affect communication and social interactions which starts quite early in the developmental period of the child. These deficits can be noticed at different areas of functioning, at home, at school, etc. There may or may not be intellectual problems. Even though these deficits start quite early in life, they may not be noticed by the parents or caregivers. And the baby may seem to be developing normally, until the toddler ages of between 2 years to 3 years. Even though some developmental achievements maybe acquired until the toddler age, when the child gets to this toddler age, even the little achieved, are easily lost. Autism is a lifelong challenge.

There are actually three levels of severity:

This shows severe problems in verbal and non verbal communication. Speech maybe present, but the words are not understood. Behavior is inflexible, with restrictive and repetitive behaviors.

The level shows marked issues in verbal and non verbal communication. The person can make simple sentences. The behavior is not flexible.

This shows some noticeable difficulties, especially when support is not available. Social behaviors maybe present, but they may seem odd and they are not able to make friends. They can make full sentences and engage in communication.

Are there autism among Nigerian children?

Many people are unaware that autism disorder can be found among Nigerian children. Knowing the exact number of children and adults living in Nigeria with autism is an uphill task. This is due to stigma, derogatory comments from neighbors and ignorance which compels parents to lock these people in their homes. So the figures published, may not reflect the true numbers.

Below is a report of the existence of autism among Nigerian children.

The prevalence of autism among children attending private special schools in the southeastern part of Nigeria is 11.4%.

Among children who attend immunization programs in Lagos state, the prevalence is 14.8%.

In normal mainstream schools in the southeast, the prevalence is 2.9%.

The prevalence among children attending a tertiary hospital in the northwestern Nigeria, is 1.4%

The causes and risk factors to autism among Nigerian children.

There is actually no specific gene that is known as autism gene. Autism is due to a combination of genetic defects, that is mutations or polymorphisms in certain areas of the gene. Although it is more common with children that have the Fragile X gene.

Neurotransmitters are chemicals in the brain that the brain cells make use of to communicate with each other.

Issues in pregnancy and birth traumas resulting from labor and delivery are risk factors to the development of autism. But it should be noted that one form of birth injury may not be enough to predispose to autism. Birth traumas are quite high in Nigeria. These cause deprivation of oxygen to the baby’s brain. Pregnancy and trauma issues that can cause these include –

Transverse lie of the baby in the womb, breech presentations and multiple births are also risk factors.

Low birth weight babies, babies that are distressed in the womb, and those with low apgar scores after birth.

Muconium aspiration, when the baby in the womb defecates and inhales the substance.

Anemia of the baby after birth, and even maternal anemia. Jaundice in new born and even incompatible blood types between baby and mother are risk factors. Blood type incompatibilities include A.B.O. blood groups and Rhesus factor.

Severe maternal illness in pregnancy is a risk factor. These include measles, rubella, and mumps. These infections cause inflations in the brain of the unborn child, and the inflammation continues after the baby is born.

Even preeclampsia and excessive maternal bleeding during pregnancy and after delivery are risk factors.

Premature separation of the placenta as well as prolapsed umbilical cord can predispose to autism.

Children conceived less than 2 months apart are also at risk.

Excess maternal body weight can predispose to inflation in the fetal brain, predisposing to autism.

Diabetes in pregnancy can affect the brain of baby in the womb. Diabetes can also predispose to preterm labor and preeclampsia.

For the fathers and mothers, there are mutations in the sperms and ovum (egg) respectively.

4. The use of medications in pregnancy.

Using certain medicines during pregnancy can predispose the baby to developing autism. But it actually depends on the time of pregnancy or gestational age. Example of medicines includes, anticonvulsants, i.e. medicines that treat epilepsy.

The use of some herbal remedies by the pregnant woman can also be risk factor for autism. Some research studies have also implicated parents with alcohol use disorder, as risk factors for autism in offspring. In Nigeria, some herbal medicines contain lead, mercury, and 100% heavy metals which can be toxic.

These include toxins and metals. The pregnant mother exposed to any of these can predispose the baby to autism. Even exposing the newborn baby to these can affect the baby’s brain.

The toxins include, pesticides, like chemicals used in the farm. Also pesticides used to spray insects in the homes are culprits. Pesticides are sold as insecticides, herbicides, fungicides, rodenticides (used to kill rats, etc.), fumigants, etc.

These toxins can be detected in fruits, vegetables, grains, and even breast milk. They can also be inhaled or pass through the skin.

Metals include lead, mercury, arsenic, etc. The load does not have to be too high to cause harm. Mercury can be seen in water, fish, soil, etc. Lead can be gotten from paints and infants that live in old dilapidated houses are at high risk.

What are the communication and behavioral issues in autism?

Before these issues of autism are delved into, it is important to know the normal development. This will help to detect early enough when something is going wrong.

A. Normal developmental stages in communication and social interactions from birth to 3 years.

Below are the communication and social development from birth to three years.

From birth to 6 months – Within this developmental period, the baby should be able to make eye contact and be able to pay attention. They can babble, and respond to conversation by making sounds, respond to his/her name.

Then 7 to 12 months – he/she continues to pay attention, and responds to conversations by making sounds. Can also respond to his/her name. Can point to things of interest, shake head to say ‘no’, wave and tries to repeat words spoken by others. At this stage, the child may say the word ‘mama.’

From 13 to 18 months – can communicate by using up to 5 to 10 words, and combines words with gestures. Looks at the person talking to her. Can imitate simple words and actions. Can respond to yes or no questions, by head gestures.  Continues to repeat words heard, etc.

Then 19 to 24 months – can name objects in pictures. Understands the words me, you and my. Can use two word phrases.

From 25 – 36 months – vocabulary increases to 3 word phrase and can know up to 300 words. Up to 50% of what the child says is understood by the caregiver. And child can understand the words ‘mine and your.

From birth to 6 months – able to recognize faces and learns to be comforted by the mother or caregiver. The child can smile and like to play with caregiver and others. He/she responds to affection and is able to show happiness and sadness. Will even imitate facial expressions.

Then 7 to 12 months – the child can express emotions using sounds and develops stranger anxiety. Can play with favorite people, etc.

From 13 to 18 months – hugs kisses and helps caregiver in putting toys away. Can recognize self in the mirror or in pictures. Gets upset when separated from parent or caregiver. Can easily get frustrated and upset and throw tantrum. Begins to show empathy by knowing the feeling of others, e.g. can comfort another child crying or a sad caregiver. Wants to be the centre of attention and applauded often. And can leave the caregiver only for brief moments.

Then 19 to 24 months – shows anger by throwing tantrums. Separation anxiety starts to reduce at this stage. The child enjoys spending time with siblings and can play with other children, but still spends time playing alone. Children do pretend play and enjoys listening to stories.

Between 25 months and 36 months – can help with simple chores. Plays more with other children. Children are a bit possessive, especially with toys, clothes, etc.

B. Abnormal developmental stages of autism in communication and social interactions from birth to 3 years.

1. At the area of communication.

And from 7 – 12 months, children who will later develop autism concentrate less, and respond to conversation less often. They respond to their names much later. They do less of pointing at things of interest, etc.

The children who are between the ages of 13 to 18 months, who will later develop autism, develop word usage much later than those who do not have autism.

By 19 to 24 months, children who may later develop autism will develop word usage by an average age of 36 months. This is opposed to other children who do not have autism.

From 25 to 36 months, the child with autism does not know the difference between mine and yours. And some may misuse pronouns.

From birth to 6 months, most of the development is delayed. Smiling back at the caregiver or mother comes much later and some may have expressionless face. It is even difficult to get the baby look at you.

At the age of 7 to 12 months these children may not play or have limited play with caregivers or mothers. Even stranger anxiety is delayed and the children show less fear with strangers.

Between the ages of 13 to 18 months, self recognition is delayed at this point. These children do not show empathy. They easily throw tantrums often. They cannot adjust to sudden changes, and this can provoke tantrums. For example, the same route to school must be taken each day and any sudden change of route can be met with the throwing of a tantrum. So they prefer routins.

By the age between 19 and 24 months, these children prefer playing alone, as opposed to other children who do not have autism. Pretend play develops much later and the child with autism does more of functional play. Functional play is done by using the toy just as it is designed. Many children living with autism do not do symbolic play and for those that do, the play is limited. They initiate social interactions only when in need. And have odd ways of playing with toys, like lining them up. They also get involved with repetitive plays, like switching off lights continuously, spinning self round and round or walking on toes.

Scamming and Ritual Killings in Nigeria